Welcome to the 3rd post in my Kaaskoppen Football Manager 2021 series. In this post we will dive into the tactic that i will use during my first season with AZ. Are you ready for some Cheeseball?

The name Cheeseball comes from the fact that AZ’s nickname is Kaaskoppen a.k.a Cheeseheads. Whenever i create a tactic i try to think of a funny name. This time around i just went with a more logical name because now this tactic fits this save perfectly. When i started with this tactic i had no specific vision, philosophy or anything else i wanted to see from this tactic. I just looked at my first team players and thought about how this tactic needed to be able to bring the best out of my players. With AFC Ajax we have serious competition in the Eredivisie when it comes to winning silverware. And we also want to do well in Europe so for the first two to three seasons we need to be overachieving. So with those to pillars as my main focus i was able to build something magnificent!

For this tactic i decided to use a 4-2-3-1 formation as this would fit my players the best. As i’ve stated earlier i want to bring out the best performances i can from them and i firmly believe this formation will do just that. With an attacking mentality this tactic aims to put a lot of pressure on your opponents but at the same time it is not a kamikaze tactic. It is a good mixture between Gegenpress, Tiki-Taka and Control Possession. At times you can even see a little bit of Direct Counter-Attack football. So this tactic offers various elements from different tactical styles. 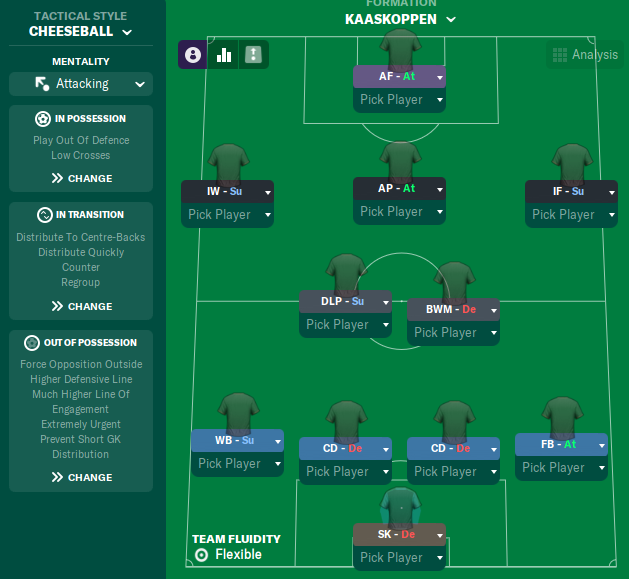 Our defence starts with the goalkeeper. In this tactic i’ve chosen for a Sweeper Keeper with a Defense duty. He will be more cautious but will still play the role of goalkeeper and outfield sweeper. He also will play Counter-Attacking balls when he sees fit. A normal goalkeeper would also be suitable but it all depends on the type of players you have at your disposal. For my left-back position i have opted to go for a Wingback with a Support duty. This lad needs to dominate the left flank both on the defence and offense and will need to supply crosses into the box whenever he can. Owen Wijndal is the perfect player for me in this system. His stamina fits this role and duty perfectly. On the right side i have opted for a Fullback with a Attack duty. Jonas Svensson is my first option on that side. He has the ability to rush down the line to provide first time crosses into the area. Because of his Fullback role he will also fulfil his defensive duties which is quite important. My defensive duo in the middle are bot Central Defenders with a Defense duty. Due to the fact that both backs will opt to move forward whenever they can i did not want to add another risk into my backline by going for a Ball Playing Defender. 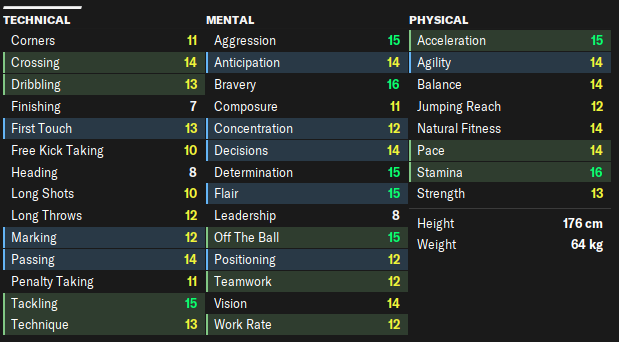 A trio players will form the midfield in this tactic. I have opted to got a Deep Lying Playmaker (DLP) with a Support duty combined with a Ball Winning Midfielder (BWM) with a Defense duty. These two players will be the engine of the team. Where the DLP is the creative brain of the team the BWM needs to win back possession as quickly as possible and then quickly lay it off to a more creative player. Right in front of these two you will find an Advanced Playmaker (AP) with a Attack duty. I’ve been messing with the role for this position for quite some time but eventually settled for the AP. I’ve noticed during games that he acts like a second striker when we need to press. He is also the player that always tries to drop into the holes between the opponents defence and midfield. This way his teammates can always find him with a pass and he will try to turn defence into an attack in an instant. With Teun Koopmeiners, Fredrik Midjtsjø and Albert Gudmundsson i have three players who will fit these roles and duties perfectly. 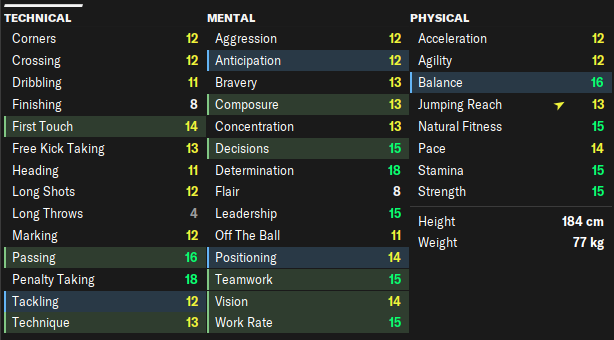 Last but not least we need to look at our attackers. With an Inverted Winger with a Support duty and an Inside Forward with a Support duty i have mixed things up. The inverted winger will cut inside much sooner and will try to cause havoc and confusion in the opponents defence. He will try to play the ball through the middle and cause an overload for the opponents defenders and defensive midfielders. Our inside forward however will try to cut inside behind the opponents defence. He will then attempt to play through balls or take long shots when the opportunity arises. Because both a backs are overlapping i needed wingers who would cut inside because then space will open up for the backs to run into. Our lonesome striker upfront will be used as an Advanced Forward with a Attack duty. This player needs to lead the line and look to spearhead attacking moves. He also has the responsibility to chase down misplaced through balls or clearances from deep. Laying of crosses or passes to his teammates and to win back possession are also things he needs to do. But his main priority is to score loads of goals! At AZ i have the disposal of wonderkid Myron Boadu. He is young but he will score a lot of goals as long as the team performs as i expecthe them to perform. He does however need to develop some attributes over time in order to fulfil this attacking role as best as possible. 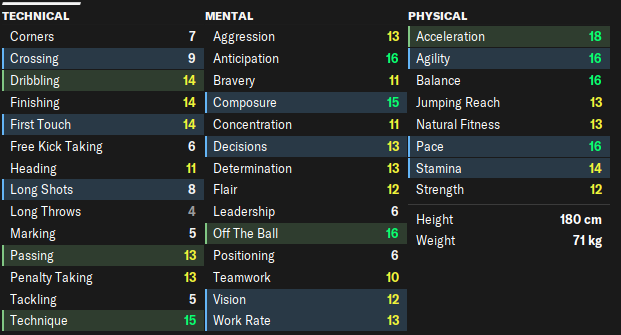 When my team has lost the ball the instructions i am using are the following;

All of these instructions complete my players their attributes and their player traits. It was quite a puzzle to decide which instructions to use and which instructions not to use. But in the end i feel these are the best considering the players i have at my disposal. A small example is that i am not using Tighter Marking. Because then my players will either move out of position too many times or they will make unnecessary fouls for which they will receive cards. All of the current settings within this tactic force a lot of pressure upon our opponents and gives us the chance to instantly switch from defence to attack as soon as we win back ball possession.

As you can clearly see from the clips above this tactic gives you different kind off options in attack. Most goals come from decent combinations between players where you end up with a through ball. But sometimes you even see the goalkeeper pouncing the ball forward over the opponents defensive line so that your striker immediately has a one-on-one situation against the opponents goalkeeper. On the defensive side of things this tactic also does the trick. At the screenshot below you see an example off how my players lined themselves up against PSV. Every pass option forward has been cut off by my players. So the only way for Piroe was to play the ball back to left-back Gloster.

Is this a plug & play tactic? No, because you do need players that can play in the roles and duties which are selected within this tactic. It is however a tactic which produces great results. Especially when you are a midtable or top team in your league. I have not tested this tactic with a lesser team but if somebody does then please share your results! This tactic however does provide you with beautiful attacks, sound goals and lovely assists. What more do you want?

I want to thank everybody for reading this post and make sure you stay safe! Also come back soon because in my next post we will take a look at my Season One Overview. Did we live up to the expectations? Did we overachieve or did we fail? Follow this Football Manager 2021 series and find out!

** This tactic can also be found on Steam

Credits for this tactic go to the Dutch FM community called fmgidsen. Click on the link below to visit their website!!