Welcome to the fourth post in my Kaaskoppen Football Manager 2021 series. In the previous post we saw a lot of cheesy tactics. In this post we will take a look at how the team performed during season one. Strap on your seatbelts and hold on tight because it’s going to be a bumpy ride!

I started my first season in charge at AZ Alkmaar with the squad i had at my disposal. No transfers were done and so this meant the money would stay in the bank for now. The goals for the first season were very clear. The board wants us to reach the Champions League groupstage or the Europa League First Knockout Round, fight for a top three spot in the Eredivisie and we need to reach the semi-finale stage of the KNVB Beker (Dutch Cup). Let’s start with our Eredivisie results!

Our fight in the Eredivisie would mainly be with AFC Ajax. That was clear from the start and that became clear at the end. They have the most money and the strongest team in the Eredivisie. But when i look back at our season we can only be very happy about our results. As you can see at the screenshot below we both ended up with 83 points after 34 matches. But as our goal difference was better we ended up as champions. We scored 82 times and only conceded 20 times where AFC Ajax scored 84 times but they conceded 29 times. So we have our defence and goalkeeper to thank for winning unexpected title. But i really find it amazing that with our attacking tactic we only conceded 20 goals. This obviously shows that we were able to dominate most of our matches as we barely got 0.60 goals scored against us per game. With 2,4 goals scored per match on average our players were really on fire this season! With the Eredivisie title in our pocket we will now take a look at our European adventure. 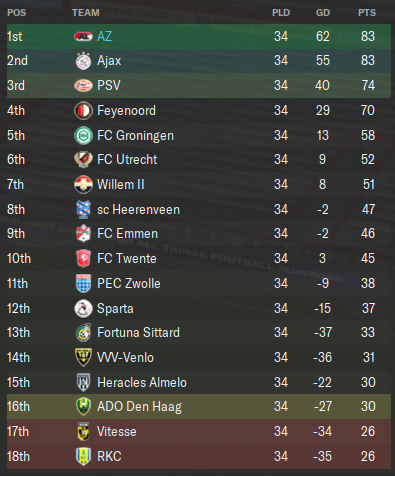 Our first goal was to qualify for the Champions League group stages. In the second qualifying round we went up against Besiktas which we managed to win 1-0 at home. Our next encounter did not go as planned. In the third round we had to play against SL Benfica but they were just too strong in the end. In Portugal we lost 2-1 which was such a shame. Teun Koopmeiners opened the score for us but Nuñez and Pizzi both scored a goal in the second half which meant our Champions League ambitions were over. So we then ended up in the Europa League Group A with Villarreal, Maccabi Tel-Aviv and NK Lokomtiva as our opponents.

Sadly we lost our first game away at Villarreal and i was really pissed off because we should’ve won that game. We had so many chances but we just not converted them into goals. After that we managed to pick up the pace and we won the five remaining games. With 22 goals scored and only three conceded we had a very strong European campaign during the group stages. We then went on beating Bayer 04 Leverkusen (3-2A & 4-1H), Real Sociedad (4-0H & 2-0A), Napoli (2-1 both H & A) and Arsenal (4-1H & 0-2) before we ended up in the final against AS Roma. As you can see at the screenshot below we managed to win the final against the Italian team. We ended up winning the game 2-1 via goals from Hatzidiakos and de Wit where Pedro score for AS Roma. I was really happy with this win because A) European succes came much sooner then expected and B) our start was horrific so i was glad we ended up winning the entire thing at the end. Our cup season was a huge disappointment. We got kicked out away at sc Heerenveen in the third round where our board was expecting a semi-final at least. For me it is always the same in every Football Manager edition. I used the cup tournaments to give my reserves and youth players a chance to play in the first team. It is a very good opportunity for them to show themselves and to show their worth to the team. In our first game against Fortuna Sittad the team did exactly do that with a solid 3-1 victory. But against sc Heerenveen most of these players showed exactly why they are sitting on the bench or are still playing their games in either Jong AZ or AZ under 18. Especially Yukinari Suguwara who let the team down by getting sent off in the 52nd minute due to a dumb fould. All went downhill from there and so our KNVB Beker adventure was over almost quicker then it began.

My first season went better then expected. Sure we failed in the KNVB Beker tournament but winning the Eredivisie and the Europa League are BIG achievements for a club such as AZ. I am extremely happy with how the team and also my Cheeseball tactic have performed. In my next post we will be diving into the statistics from season one. We will look at how the players performed, who was our topplayer, who scored the most goals or gave the most assists. Stay tuned and you will find it all out once the next post goes live! For now stay safe and til the next one!