Today’s tactic is an example of what doesn’t stick. What we toss into the shredder of bad ideas and reforge into something that I think plays some fantastic football. 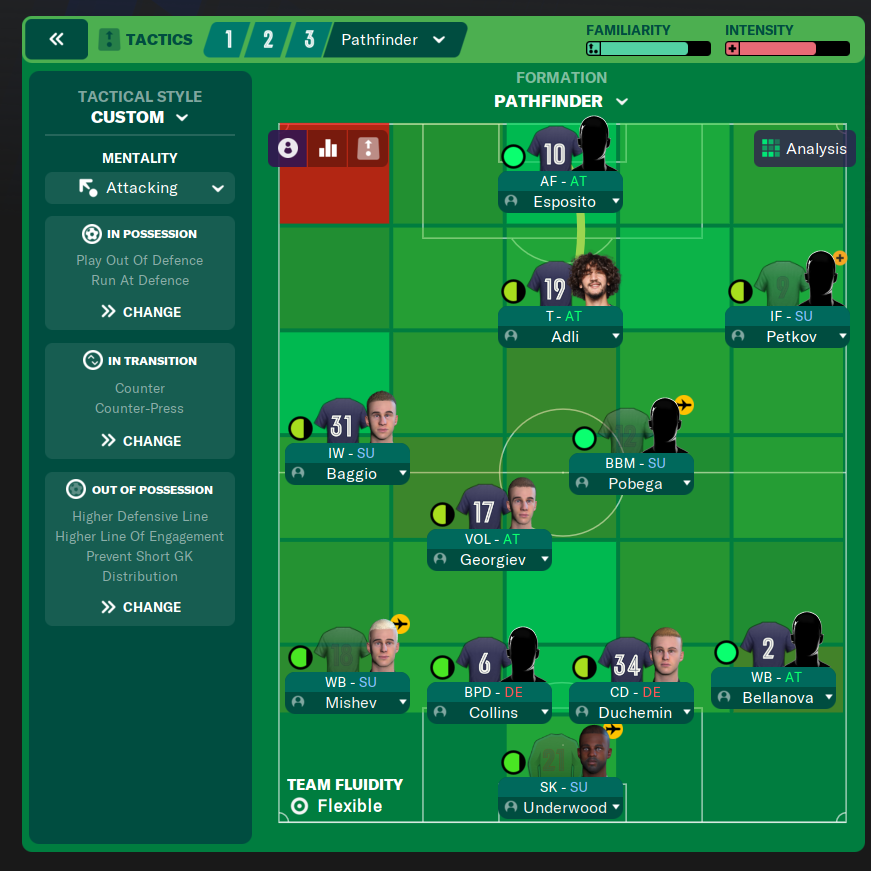 Pathfinder is me taking the best of a bad situation, and turning it to my advantage.

When I was coming up with ideas for the fifth Instalment, a fun little Tactical Instruction caught my eye.

And as you can see from the tactic above, Pass into Space did not make the cut.

Originally, when I was first getting started Pathfinder was found on two principles.

Now fluid systems in prior FMs was just a slider you could hit. Very Fluid all the way down to Rigid/Structured. Over the past couple however, what sets your fluidity is the number of support roles you have in the side. As you can see here, just me changing my Volante and RB to Support roles has moved it from Flexible to Very Fluid.

The drawback to that?

Support vs Attacking blunted my offensive capabilities and that was what I quickly found in the Very Fluid/Pass Into Space wombo-combo. We’d dominate the ball, get into attacking positions, but just grind out 1-0/2-0 victories and were very susceptible to draws. Now, as you may have seen from literally every other tactic in this series, goals are my religion. 1-0 isn’t good enough. With that in mind, we put those principles on the backburner and revamped the line-up. I kept a portion of support roles so as to still keep a measure of fluidity, but transitioned more into Attacking roles so we became much more ruthless.

Compromise in the pursuit of perfection.

Let’s look at the player roles, particularly the midfield: Inside Forward, Volante, BBM, Trequartista, Inverted Winger. All were built with Pass into Space in Mind and all roles have significant movement off the ball. The players are encouraged to get forward and find the ‘space’ I was expecting the ball to be passed into. Now while I abandoned the instructions the roles were based on, the roles themselves had led to some pretty fantastic football, just lacking some ruthlessness.

With this in mind I gave them a more attacking bent, and decided that given the technique, dribbling and off the ball movement of the players I’d been using, forcing them to Run at the Defence would wreak all kinds of havoc given how perfectly capable each was of terrorising a defender on their own. With the Advanced Forward you have six players all able and willing to take on a man, and the rampaging wing back out right a ready option to spread the play.

As you can see here in a really nice piece of football, Bellanova has already been brought into the opposing half and the body of players on the right side of play drags open space out left for our Inverted Winger to come into. Where he lays a magical ball for Minchev to finish off a lovely team play. Our two central midfielders in Pobega and Szoboszlai are happy to sit up and provide an attacking threat of their own while our forwards and Treq/IF and AF occupy the attention of the defence. In effect the offence plays as a diversion for the midfield, allowing the midfield to create chances of their own.

When talking about our midfield, the primary players would be Sandoval at ML, Szoboszlai at BBM and Pobega at Volante. Between the three of them they’ve contributed for 21 goals, and 28 assists over the course of the season. As you can see as well, wing backs also went in for 23 assists between them and were our most effective suppliers outside the midfield.

Unlike some of my previous stuff, this one is a lot more traditional. Or at the very least it operates that way.

Without the ball our defence runs a compact 4-2-3-1. The BBM and Volante drop deep and both do their defensive duties well, while the IW on the left tucks in and sits around the same height as the Centre Mid. As for how compact the system is, it’s relentlessly difficult to break down. A combination between having some absurdly high quality players in Collins and Underwood, but as a counterpoint the best CB we had alongside Collins was one of three 2* CA players since we spent the year blooding youth alongside him. So it’s not sheer quality that makes the system work, as much as the system itself.

Doesn’t mean I won’t add them in just for general adoration purposes though.

With the system in place we’ve conceded 10 goals across the whole season. That’s right Ten. Our next close contender is as always PSG but they are nowhere near our defensive efficacy with 22 goals conceded. Meanwhile the rest of the league exists.

As you saw earlier in the article, the offence is smooth. Some quick clean passing, incisive dribbling by our midfield and we can as easily get to the byline as we can pass through the centre.

The Volante sits a bit deeper than anticipated, but the rest of the team does a stellar job in making up for it. Our Left Back in particular races forward even if they’re only on the support duty. We hit 4 men in the Attacking midfield strata with the lone striker doing his shtick up top. The BBM, AP and IF combo into a nice triangle that allows for some sexy futbol to be played inbetween. Meanwhile Bellanova our Right Back gets to make his way through on the overlap.

With run at the defence enabled we really get to bring in our players through a variety of roles. Our Trequartista runs it through the middle, while our IF/IW and Backs run it through the wings. The AF and Centre mids rarely get in on the action but from time to time make some runs of their own. We’ve set up the team to have players all capable of taking on and going past a man. Once we then give them the freedom to do so it makes for some nasty plays and the engine is capable of creating some amazing runs from midfield into the box.

From the earlier photo showing we’d conceded 10 goals in 30 games. I finished that season recently and it was arguably the best one I’ve ever had in the game. 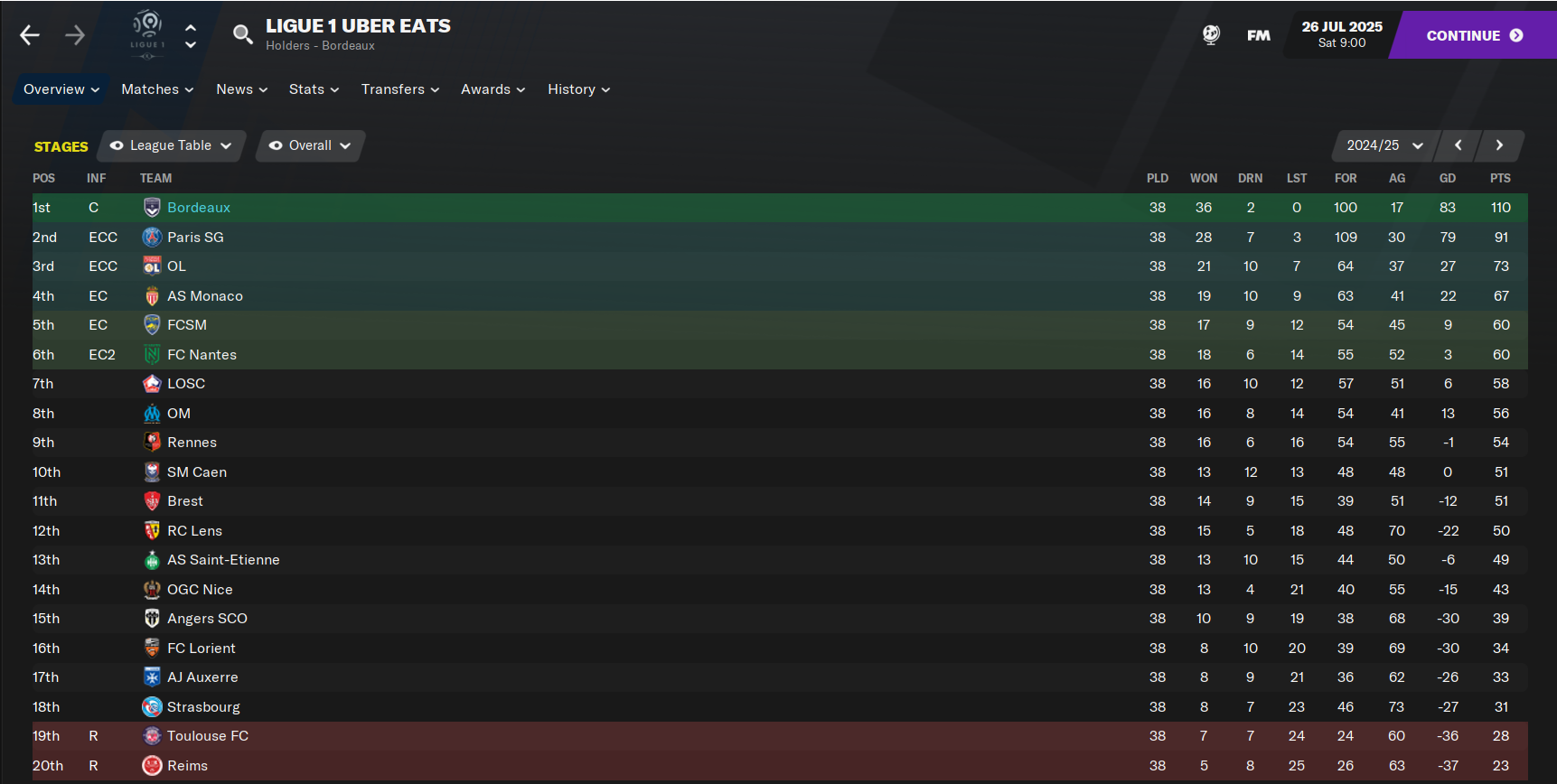 100 goals in a season, 17 conceded in a treble winning year with the French Cup, Champions League and League in an invincible season. We built off the success we’d had with South Star and then took our team to another level with this. I’d go into XG, Goals and Chances, but an invincible season speaks for itself and the play revitalised my flagging interest in the save proper.

I said at the start of this article that this tactic came out of everything going wrong. I couldn’t get what I wanted to work with the ME and I was close to wiping the whole slate and starting over. Turned out I just needed to tweak some instructions, move some roles from support to attack and suddenly everything clicked. While I’m happy for anyone to use Pathfinder, I think it should also serve as encouragement for people about to bin their own tactics to just take a second, flip some switches and tweak to your hearts content because everything could fix itself with just a couple of changes. 1 thought on “Bent Out of Shape Part Five – Pathfinder”